An Afternoon with Silas House 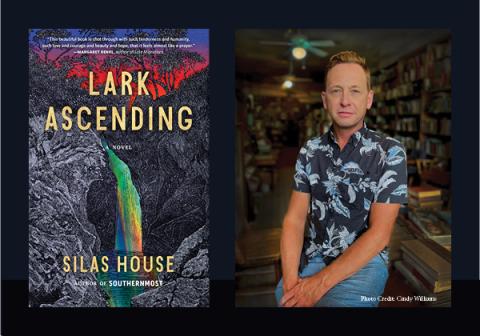 Don't forget about this event. Add it to your calendar.

Let your friends know about this event! Share it on social media.

The Paul Sawyier Public Library is proud to welcome New York Times bestselling author Silas House as he reads from and discusses his new release, Lark Ascending. A signing will follow with copies of the book available for purchase from Poor Richard's Books. Please register, as space is limited.

Silas House is the nationally bestselling author of the novels--Clay's Quilt, A Parchment of Leaves, The Coal Tattoo, Eli the Good, Same Sun Here (co-authored with Neela Vaswani), and Southernmost--as well as a book of creative nonfiction--Something's Rising (co-authored with Jason Howard), and three plays.

House is a former commentator for NPR's "All Things Considered". His writing has appeared recently in Time, The Atlantic, Ecotone, The Advocate, Garden and Gun, and Oxford American. House serves on the fiction faculty at the Naslund-Mann Graduate School of Creative Writing and as the NEH Chair at Berea College.

He is a member of the Fellowship of Southern Writers, the recipient of three honorary doctorates, and is the winner of the Nautilus Award, an EB White Award, the Appalachian Book of the Year, the Storylines Prize from the New York Public Library/NAV Foundation, the Lee Smith Award, and many other honors, including an invitation to read at the Library of Congress. Southernmost was a longlist finalist for the Carnegie Medal for Excellence in Fiction and appeared on several Best of 2018 lists including The Advocate, Booklist, Paste, Southern Living, Garden and Gun, and others. The book was given the Weatherford Award as well as the Judy Gaines Young Award.

House was an executive producer and one of the subjects of the documentary Hillbilly, which is now available on Hulu. The film won the Audience Award from the Los Angeles Film Festival and the Media Award from the Foreign Press Association. As a music journalist, House has worked with artists such as Kacey Musgraves, Kris Kristofferson, Lucinda Williams, Jason Isbell, Senora May, Leann Womack, Charley Crockett, John R. Miller, and many others. House is also host of the popular podcast "On the Porch". In 2021 he was the recipient of the Governor's Award from Kentucky Governor Andy Beshear for his service to the arts.