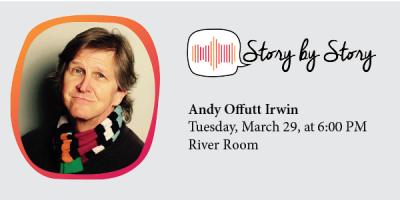 In “An Evening with Marguerite Van Camp, M.D.”, Andy tells the adventures of his eighty-five-year-old-widowed-newly-minted-physician (fictional) aunt, Marguerite Van Camp, a woman who avoids curmudgeonship by keeping her finger on the pulse of the changing world around her as she seeks to grow – even at her advanced age – in the New South.

With a manic, Silly Putty voice, astonishing mouth noises, and heart-filled stories, Andy Offutt Irwin is equal parts mischievous schoolboy and the Marx Brothers, peppered with a touch of the Southern balladeer. He has been a Featured Teller at the National Storytelling Festival ten times and is a perennial favorite at the International Storytelling Center’s Teller-in-Residence Series. A storyteller, theatre director, singer-songwriter, and Shakespearean actor, Andy was Artist-in-Residence at Emory University’s Oxford College from 1991-2007. He has performed at LaGuardia High School of Performing Arts in New York (the FAME! school), The Library of Congress, Walt Disney World, and a whole mess of theatres, colleges, and festivals all over the United States. Andy lives in Covington, Georgia. He thinks he is funny.